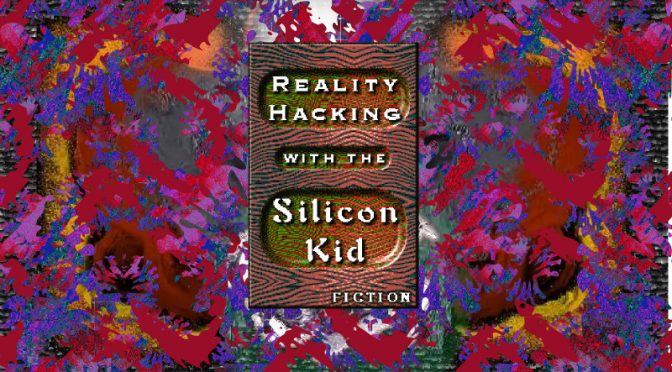 The Silicon Kid was born in the first hard copy edition of Say What published in the winter of 1994 with “The Virus: A Cyber Tale”.  Anyone who has a copy of this will notice that The Virus has changed, actually, I pulled this version, the original story, out of my diary. I changed it in the first edition because I felt it was a bit too technical for most people to understand, but I think most people who have access to the Internet will be able to understand it.
“The Further Adventures of the Silicon Kid” was published in “Random: First Offering” a magazine published by Mountaintop Publishing.

That night, me and the Kid had been planting logic trees. The Kid was real good at it. A logic tree is basically a question you ask the new_NET, the new_NET takes the question and answers it, big deal, right? Well, the question is answered kinda like the way a thesaurus defines a word, by giving any and all information associated with the question. It’s called a tree because the NET presents the “answer” in a series of paths of logic, like trains of thought branching out. The Kid was brilliant at asking questions in such a way that the branches would continually reconfigure themselves, like a thought in flux, never quite resolving itself.
The Kid planted a bunch of “seeds” in one of his hard drives, then linked up to the NET, which fit itself holographically into the Kid’s available memory, including the hard drive containing the seeds, then he disconnected. As the trees grew, the Kid displayed them to look like a 3-dimensional orchard we could “walk” through. Each tree was a thought unique, you could look and see each branch was a series of sentences all branching out from a base idea, it was beautiful. That’s when the virus hit.
It looked like one of those old security programs from before the SYS_wipe of ’99. Back then the control freaks were getting way outta hand, they developed security programs that didn’t just block unauthorized access, but would trace back to the intruder, and eradicate their system, blowing out all their onboard memory AND plant viruses that destroyed all their hard drives. Pretty scary.
No one knows how the SYS_wipe went down. Just that it was sure chaos until everyone got used to the new_NET! Pretty strange system, the new_NET, seeds a microcosm of itself into any system it comes in contact with, as well as absorbing any and all the information. The ultimate virus of sorts, no way of purging it. That’s okay though, the new_NET has its advantages. It’s the ultimate number cruncher, has this way of folding information into itself ad infinitum. Each time you go online, the whole system is downloaded, reconfiguring ALL the information into the size of your available memory. You can’t keep any secrets on the new_NET, so don’t keep any diaries, or personal information on your hard drive when you go online, or anybody who wants to look, will be able to see it! The control freaks hated it, information couldn’t be used as currency anymore, nor could any “banking” in the old sense be done. Everything is based on exchange now, no imaginary numbers representing abstract notions of worth, just open acknowledgement of who did what and a convivial exchange based on need. By the time the control freaks realized what was going on, it was too late, the change had come.
I don’t know how the virus had survived, no one else had seen one since the SYS_wipe, but then again, the Kid was no ordinary user. I never seen the Kid move so fast. Within a microsecond, the Kid did a reset, but the virus downloaded itself into the hard drive with the logic trees in it, and started destroying the orchard. The Kid was PISSED!
He pulled out his HEX keypad, linked straight into the central processing unit, and started doing battle… realtime! His hands flew like a digital hummingbird above the buttons blooming from the keypad. The Kid told me afterwards that he can do that by letting his instinct take over. He says his brain works in loops, with the main one overlooking everything, providing direction, meanwhile, a series of smaller and smaller loops running in parallel look after specific tasks. “It’s like walking,” the Kid says, “you think about the direction your walking in, not how to move your legs to make you go.”
I watched in amazement as the Kid chased the virus around his system. He told me the virus was self modifying, re-adapting itself from one situation to the next. That’s when the kid really freaked me out, he actually made self modifying subroutines to combat each new virus! The virus bounced from one peripheral device controller to the next, the Kid hot on its tail. Bits of subroutines littered the data path. The Kid finally trapped the virus in a floppy disk controller, caught it in an infinite for-next loop, and wiped it from memory.
Then he sat back, gave me the strangest smile, said “Sure am glad that didn’t get on the NET!”, and then broke out laughing. I just sat there scratching my head.

Further Adventures With the Silicon Kid