I’m a visual artist, a poet, a performer, a seeker, and many things besides. I live in the bush, it’s where I like to be. I like to feel the hope in the undying earth pushing up beneath my feet.

I have the advantage of having found a circle of friends, a community, that embraces and supports me. It has nurtured in me, the ability to feel joy, the ability to find comfort in my darkest hours, and the ability to give and receive acceptance in the most difficult situations.

I dare to hope in these dire times…

At this point, I figured I’d put in my Artists Statement that, though I wrote it about 2 years ago, is still valid today, reminds me that there is some consistency in my path…

WEBmadmanArtist’s Statement of Purpose:
My goal as an artist is to express and externalize the subconscious and emotional processes in a highly personal way. In order to attain a mode/method of expression that is so personal, that it becomes universal. My prime intent in this, is to inspire anyone observing/absorbing these expressions to seek their own form of expression. I view the creative process as a vital experience in any persons development, not everyone will attain a high level of skill in their given expression (and hence do not produce “saleable” work), but this is not necessary for the sense of fulfilment that comes from the creative process. “Artists” are the trail blazers who dedicated their lives to developing the arena of art so that others can “come and visit” and hopefully come away from the experience revitalized. I aim to accomplish this task by engaging in and developing a variety of methods and techniques of expression (including visual, written, spoken and performed) and through practised repetition, reach a state of intuitive/subconscious automation. This is to allow the flowing out and rendering of dream-like images that contain archetypes, beyond those attainable by reason, thereby resonating and corresponding with the observer’s own dreams and subconscious processes, within which lie the roots of creative expression. This, I propose, may inspire the observer to express, in their own way, something of their own internal reality.

I feel that, in our current times, there are a great many tools available to accomplish this, and I intend on exploring as many of them as possible. Right now in North American culture, I feel that art in general is not reaching a large portion of the population, except in the form of advertising (posters for beers and bands etc.), this is due to the prohibitive prices on most art available in galleries. Photo-reproduction technology now offers me, as an artist, to make my work widely available at a minimum expense, and still allowing me to make a living (this is not, I feel, a matter of “quantity over quality”, but is actually the opposite, allowing the artist to focus on each image more intently, knowing it will be experienced more readily by a larger number of people). The “original” art is still available for traditional sales in galleries, but can be supplemented by these photo-reproductions.

I use the word “original” in quotes because the concept of “original” is being brought under question in the light of computer generated and enhanced art. The traditional methods of art production (painting, drawing, sculpting, etc.) have a clearly defined original, but, in the digital realm of computer generated images, the original is “soft”, it can be duplicated ad infinitum, and the first image is indistinguishable from any other, the question arises then, what is an original piece of art in the digital age? I have a number of pieces that I have done in/on a computer, from this digital creative process, I have made “hard copies”, which are physical images on paper, of some of these, I have then erased permanently the files relating to the hard copy, is this hard copy then the “original”? I’m beginning to feel that these questions are becoming irrelevant, because art is now becoming fluid, a piece is never “finished”, but merely has “snapshots” taken of it, which can then be reproduced and distributed. This, I feel, brings the focus away from “art as an object” and towards “art as an expression”, and as such, calls upon the artist to develop and emphasize the aesthetics and content of their expression to have the most direct and lasting impact on the observer, and the most direct and lasting impression, I feel, is to inspire others to engage in creative expression, which brings me back to my prime intent. 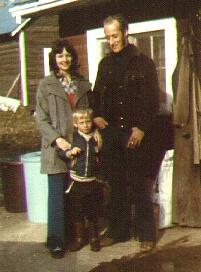 This is a picture of me with my mother and father. It was taken at my grandmother’s lodge in around 1970. I was staying with my grandmother while my parents went through their divorce. I didn’t see much of my father after that, only a couple of visits, which I have fleeting memories of, a round glass table, big curtains in front of a window, the city lights out of an apartment window. I remember shopping with my dad’s new girlfriend, she bought me a puzzle of a picture of Sylvester fishing in a gold fish bowl, years later I found the puzzle and remembered a kind woman with a pretty smile.

I did see my father many years later when I was 15, just after my mother died. I was at my grandmother’s and somebody showed up for a visit, when I walked into the kitchen, the couple looked familiar, my grandmother said, “Wayne, this is your dad.”

It was an awkward and surreal situation, I hadn’t seen him since before me and my mother left for Thompson, Manitoba when I was 5. I went to my bedroom and got something that I had just found, going through my mother’s things; their marriage licence. The situation became a little bit more uncomfortable, and my father and his common law wife (the same one I had met years before), left after only staying an hour, road conditions where blamed, but before they left, a visit was planned for me after school was out for summer.

The 3 week visit continued in the same awkward tone of our first encounter, accept now I met my sister, and truly met my step mom (we stayed up late playing scrabble and talking about all the emotional complexities of the situation, well, I mainly listened, a role that I’ve become quite used to in life, but in this case, I learned a lot about my father, and in reflection, myself). My sister frustrated me at the time, her moments of perceptiveness and lucidity dazzling me, but shattered by the self-indulged attention seeking of an only child, I was fighting this within myself at the time. Now, of course, I realize that it’s been an essential element in developing a certain charisma 😉 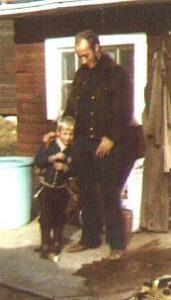 I never saw my father again. I invited him to my college graduation, and he declined, saying that he was too ill, I took it as a spurn, didn’t think to realize he may have actually been that sick… I also felt that he didn’t really love me, that I was somehow not what he wanted. He died just over 2 years later, after a long fight with cancer, and not an easy one, if there is such a thing.

Last week, I was up at my grandmother’s place (the same one she bought within the year of my birth), and I saw the above photo of me with my mom and dad in a frame on her wall, I asked her if she had more, and out came a bag of pictures. I went through quite a series of emotions in looking through these freeze-frames from the past, and the picture I found of me with my father somehow, I don’t know how, tells me he did love me, that he was proud to have a son, and that I am he, my father’s son, all I needed to see, was evidence of his affection… 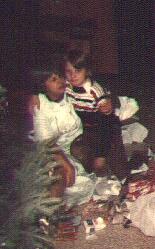 So the thread through this tale of my past is my grandma, or “Grams” as I like to call her. A truly remarkable woman, if not a bit frustrating, our views of reality differ quite greatly, but I’ve learned to appreciate her intent, one of peace and harmony, and so, I try to swallow my own heartfelt convictions, to listen, for a moment, to the wisdom of her experience, and I hope to stay as strong as she has into my own fragile years. I live close to her now, and try to visit as much as I can, I truly do love my grandmother.